In 2004, the Centers for Disease Control and Prevention (CDC) identified accreditation as a strategy for strengthening public health infrastructure in its Futures Initiatives. This paved the way for a national accreditation system with the goal of providing a set of standards and measures that can be used to achieve performance excellence for health departments.

In this one hour webinar, which is part of the Hot Topics series, Joe Finkbonner, RPh, MHA, and Bud Nicola, MD, MHSA, give an overview of the national accreditation system with particular insight into tribal health departments, as well as local and state departments. They also provide an update about the current status of the national accreditation structure and system.

Joe Finkbonner, RPh, MHA, is Executive Director of Northwest Portland Area Indian Health Board (NPAIHB). Prior to his current position, Joe was the Director of the Northwest Tribal Epidemiology Center (The EpiCenter) at the NPAIHB. The EpiCenter is one of 12 epidemiology centers nationally that focuses specifically on American Indian/Alaska Native health status. Joe began his work in Indian health for the Lummi Tribe as the Health Director/CEO and was very active at State and Federal levels in his efforts to heighten the awareness of disparities of the AI/AN population and to assist with focusing action toward improving the health status through policy development. Joe's efforts were through his membership on the Washington State Board of Health, participation in the Washington Public Health Improvement Plan, and miscellaneous workgroups for the Indian Health Service. Joe recently was selected as a member of the Public Health Accreditation Board. 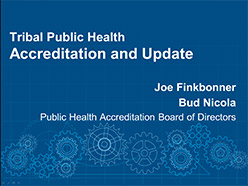