Emergency Community Notification Systems (ECNS) work like 911 in reverse, allowing agencies to contact pre-identified groups in the community, poll them, and capture data on their responses. This automated process helps epidemiologists and public health nurses quickly identify the portion of the population that will require in-person interviews in a cost-effective way.

In this one hour webinar, which is part of the Hot Topics series, Emergency Preparedness and Response Staff from Clark County Washington discuss the benefits and lessons learned from implementing an ECNS to identify potentially exposed people during several disease outbreaks.

Richard Konrad was trained as a teacher and taught in secondary schools and community colleges before joining the Fire Service. After serving as the Operations Deputy for a mid-sized municipal fire department, he left to help develop one of the earliest Associate Degree Programs in Emergency Medical Services. After moving to the Vancouver-Portland area, he served as the administrator of a regional trauma care and Emergency Management System planning agency. Richard currently works as a Region IV Public Health Emergency Response Coordinator in Washington state.

Lianne Martinez has an A.S. in Criminal Justice and a background in community corrections. She currently works as a Region IV Public Health Emergency Response Coordinator in Washington state. In this capacity, Lianne coordinates the region’s Medical Reserve Corps and serves as Sections Chief on a Type 3 All-Hazards Incident Management Team. 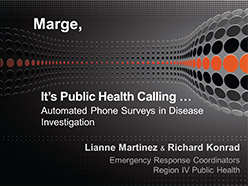