On the evening of May 22, 2011, a half mile-wide tornado ripped through Joplin, Missouri destroying 30 percent of the city in 10 minutes. In this one hour webinar, which is part of the Hot Topics series, Joplin Police Chief, Lane Roberts, recounts the events of the storm from the early warning signals to the community’s recovery. Roberts also discusses the details and decisions that made this a successful coordinated response between state and local emergency management staff. 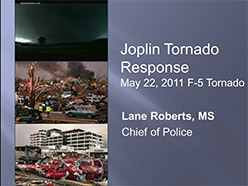